Everything You Need to Know About Mass Transit!

Mass Transit has a lot of firsts for Calliope Games. It is our first cooperative game, our first solo game, our first game with multiple designers, and the first game that I was introduced to when I joined the team in 2020! Today I am thrilled to teach you more about this Sisyphean task of a card game that I will play no matter how many times I lose (and I say this with all the love I can muster). 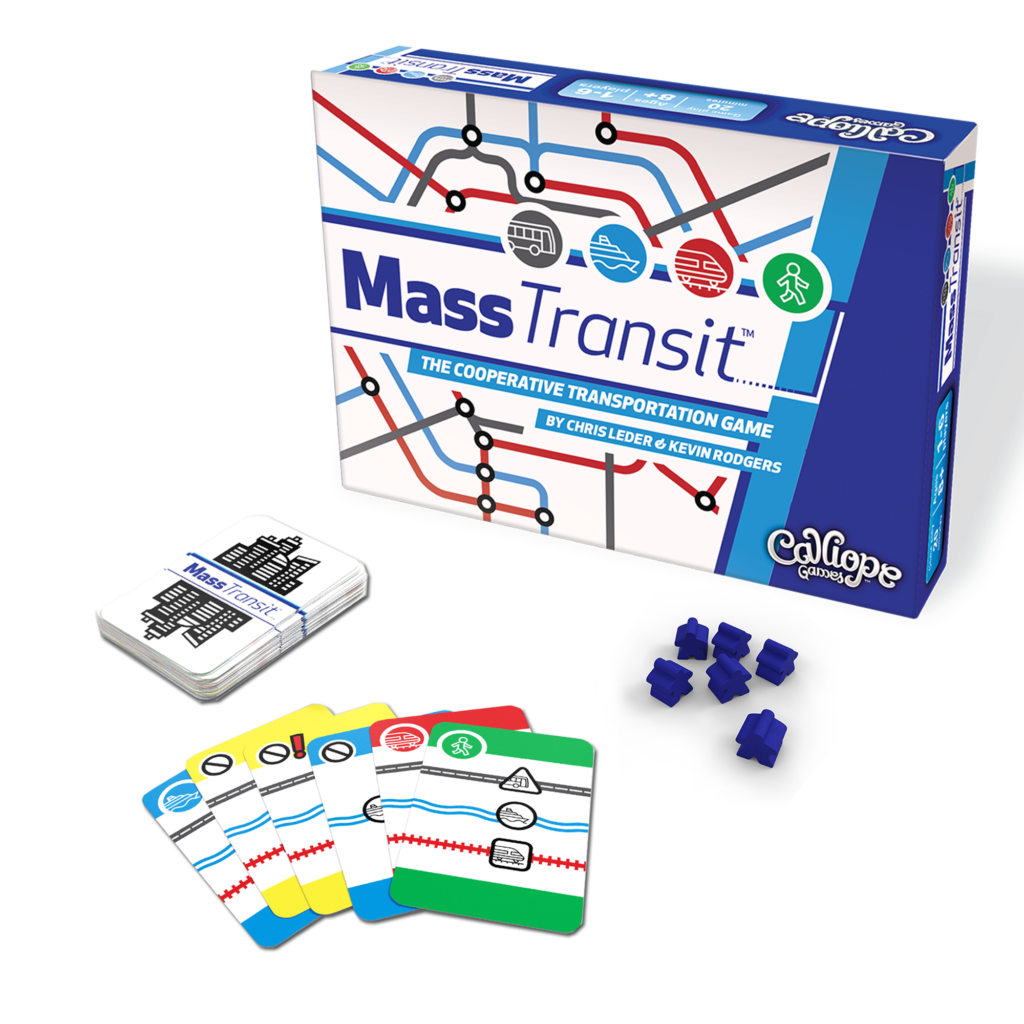 Cards on the table (heh), our founder Ray doesn’t really like cooperative games. He doesn’t like the “quarterbacking” problem of one player telling everyone else the most optimal move and not letting others think and enjoy. So how did Mass Transit wind up in our lineup? Well aside from that fact that it is a fantastic game, it is also a limited communication game! Which means the problem of quarterbacking is greatly minimized, and it adds an extra layer of strategy to the game! So how exactly do you play this strategy-heavy but easy-to-learn game? Glad you asked! 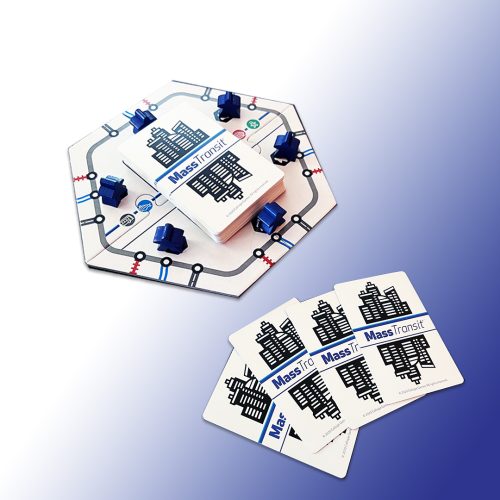 Setup
Set out the big city board and 6 meeples on their starting spots. Deal everyone 4 cards. If anyone starts with 3 suburb cards, put them back, reshuffle and re-deal. Place the rest of the cards in the middle of the table That’s it!

Goal
Cooperatively play cards to create routes and get all 6 commuter meeples from the Big City board to their homes in the suburbs. You will play 2-4 cards on your turn, and if you ever cannot play 2 cards legally, the game is lost. If you get all 6 meeples home, the game is won! 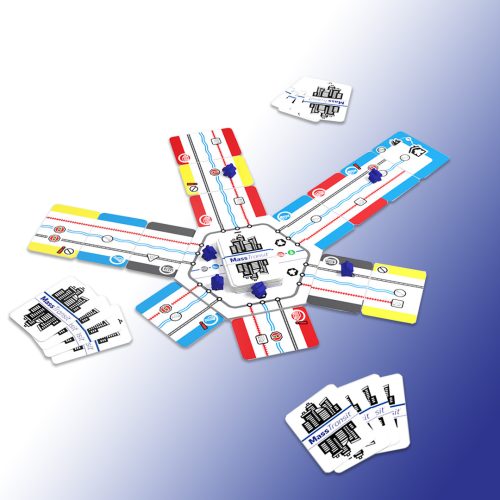 Gameplay
Honestly, the hardest part of this game is learning the card colors and symbols (and that’s really not that hard). The gameplay itself is super simple. On your turn you’ll play 2-4 cards. You can either play them on the table to expand a route, or you can discard the card to move the meeple to the next station on the route. All meeples must walk to the first station. So if the first card in the route does not have a station on it, you will need to play Walk cards until you get to a station. After you play your cards, draw back up to 4 and play proceeds clockwise.

While you are indeed working together, communication is limited, though not forbidden! Meaning you can’t announce “I have a walk card so don’t worry about getting that meeple started,” but you can say something to the effect of, “I brought my running shoes to work today,” and let the rest of the players interpret that as they will.

Card Breakdown
Gray, Blue, and Red- Bus, Ferry, and Train lines respectively. You can play these on the table as routes, or discard them to move a meeple from one station of that color to the next.

Suburb- The end of the line! There are 2 suburb cards per transit line, and the number on the card indicates how many cards need to be between the Big City and the Suburb. Once you place a suburb card you cannot play any more cards on that route.

Green- Walk cards. These can be played as routes or discarded to walk a meeple exactly one card. All meeples must walk to the first station.

Yellow- Null cards. These can only be played as routes, they cannot be discarded to move meeples.

Symbol Breakdown
Exclamation point- Urgent cards. These cards must be played during your turn, but they don’t need to be the first card you play.

Traffic Symbol- Traffic! It happens. It will slow you down. You must leave traffic in the same manner you entered (bus, ferry, train, or walking)

Dead end- This line of transit ends here! You’ll need to use a walk card to walk to the next card with a station. 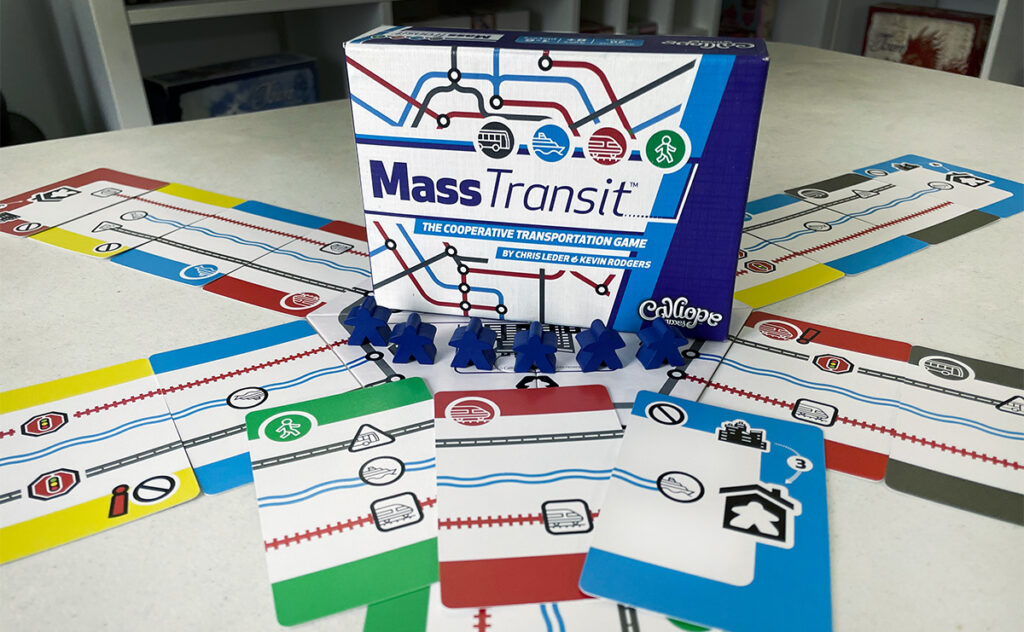 Is the game over if we run out of cards?
Nope! The game only ends if you can’t play at least 2 cards. If the draw pile is empty, keep playing with what you have in your hands.

Can I walk out of traffic if I didn’t walk into it
Nope! This is the most common question we get. You must exit traffic in the same manner you entered it. No jumping off the ferry and swimming to the next stop.

Any suggestions or strategy tips?
You’re talking to the wrong person here! But I have found that the more direct routes you can create (meaning one station right off the Big City, and no more stations on your chosen route until the Suburb) that will help save on route cards you need to discard.

Designer Playthrough- Chris and Kevin, the game’s designers, play through a 2-player game
Designer Interview- Chris and Kevin share their thoughts on how the game was developed
Tabletop Tonight- Ruel Gaviola plays through the game with his wife and daughter
Sushiball Games- Written overview and review
Tabletop Family- Written review focused on family play

2 thoughts on “Everything You Need to Know about Mass Transit!”