Everything You Need to Know About Station Master!

NOTE: While the gameplay is identical, this article features a previous edition of Station Master with components slightly different than those in the newest version.  Please see our Station Master page for images of the updated components!

The story of Station Master (at least with us) begins in a small Irish pub during one of the first conventions that our Director of Fun™, Chris Leder, ever attended with Calliope Games. He sat down at a table with Calliope President Ray Wehrs, who took out a worn-out copy of a game.

“This is my favorite game of all time,” Ray said. So already, big expectations.

Ray proceeded to teach, and then completely annihilate, Chris at a game of Station Master. As they’re putting the game away (both having enjoyed it because winning isn’t everything), Ray leaned back in his chair.

“You know, if I could ever publish this game, I would make it SO beautiful. Because it’s such a fun game, and I don’t think enough people knew about it to really appreciate it.”

Several years later, Ray would get his chance. And that’s how Station Master wound up at Calliope’s station. 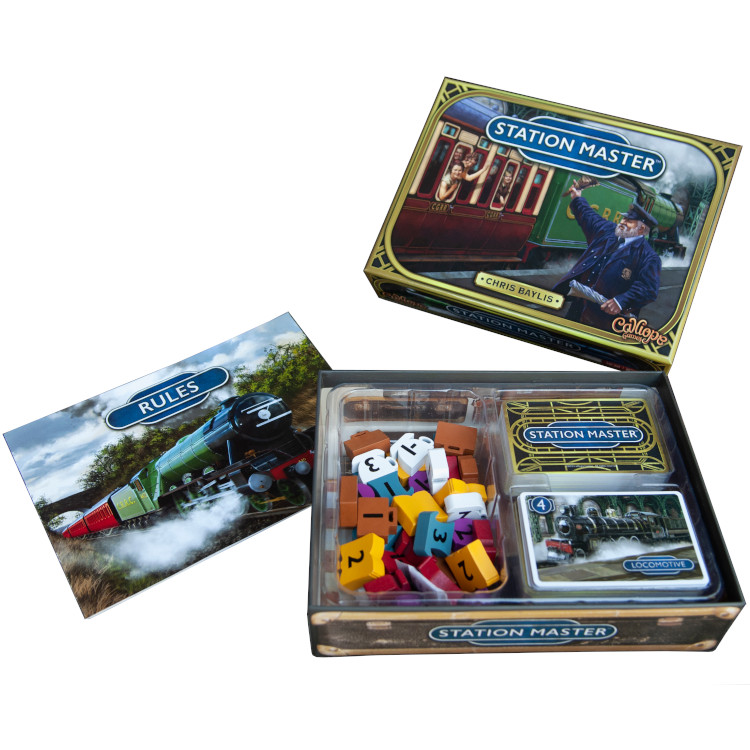 Station Master is a simple game of card and pawn placement. Like most in our lineup, it is easy to learn, but difficult to master. You play as commuters making their way through a train station, and your goal is to play railcars and passenger pawns onto the various locomotives across the table in order to maximize your score. Different railcars have different abilities, and the pawns that you play face down might be negative or positive, so you need to be aware of what the overall value of the train will be, because once the train leaves and you flip those passenger pawns over, you might be looking at a negative score instead of a positive! But don’t forget, a negative times a negative equals a positive…

Yes, math is a big thing in this game, and we highly recommend it for those practicing multiplication and positive/negative numbers. 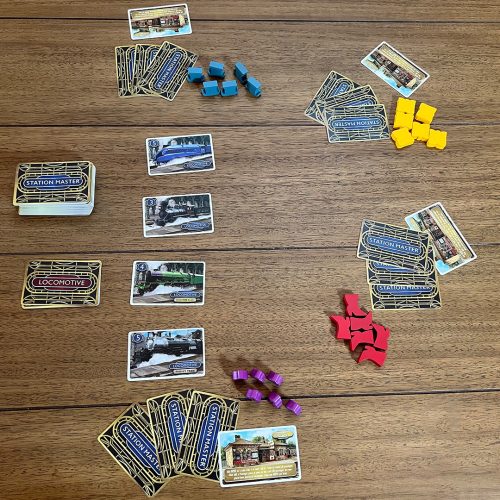 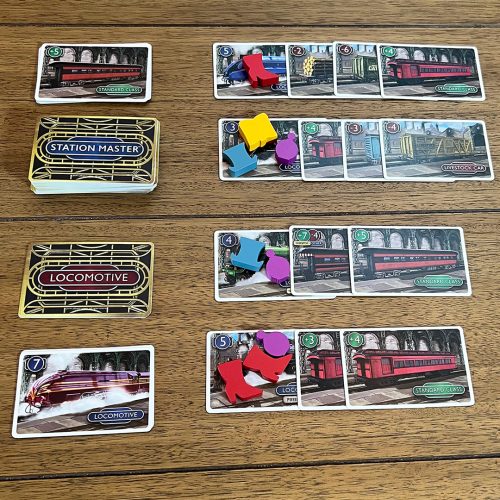 On your turn you will always do 1 of 2 things (no passing your turn).
1: Put a passenger pawn on a locomotive
2: Play a Station Master card and draw a new one. Station Master cards are usually railcards, which contain a positive or a negative number. There are a limited number of action cards that happen immediately and can affect locomotives, railcars, or passengers. 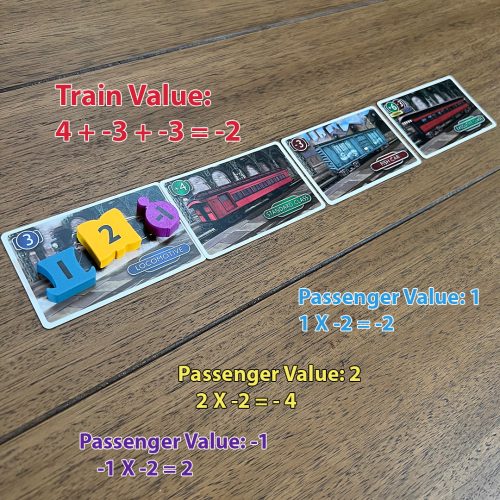 Scoring
Once a locomotive reaches its max number of railcars (it doesn’t need to have the max passengers) it leaves the station. Add up all of the railcars together to determine the Train’s Value. Flip over all the passenger pawns and add your pawns’ values to get your Passenger’s Value. Multiply your Passenger value and the Train’s value to get the train’s score (and remember, a negative times a negative equals a positive!)

The game ends when every Locomotive card has been played and left the station. The player with the highest score wins! 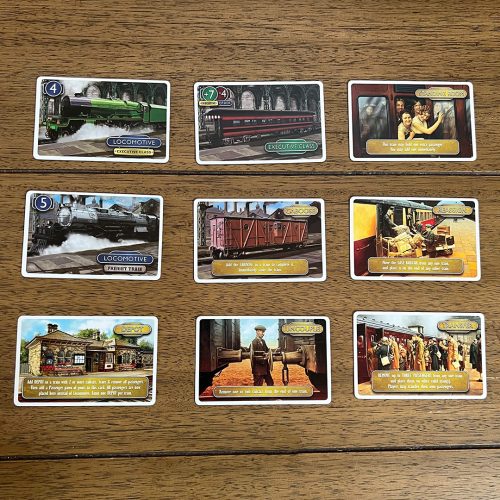 Special Cards
The Depot Card: You can play your Depot card once per game instead of doing your one action. The Depot card lets you immediately score the train it is on (foiling any plans!) and has you start fresh from the Depot, with the Depot holding the same number of Passengers as the Locomotive it was placed on.
Executive Class Coaches: These railcars score positive points when attached to Executive Class locomotives, but negative points when attached to any other locomotive
Freight Train: These locomotives score opposite! So for both Passenger pawns and Railcars, all positive values are negative, and vice versa.

There are also various Station Master cards that are not railcars, but instead create other effects in the game. A few of our favorites:
Transfer: Move any 3 passengers from one train and place them onto other trains as you see fit.
Caboose: Add this card to the train and immediately score it.
Uncouple: Remove 1 or 2 railcars from the end of one train.

Check out the glossary in the back of the rulebook for a rundown on all the special cards in the game. 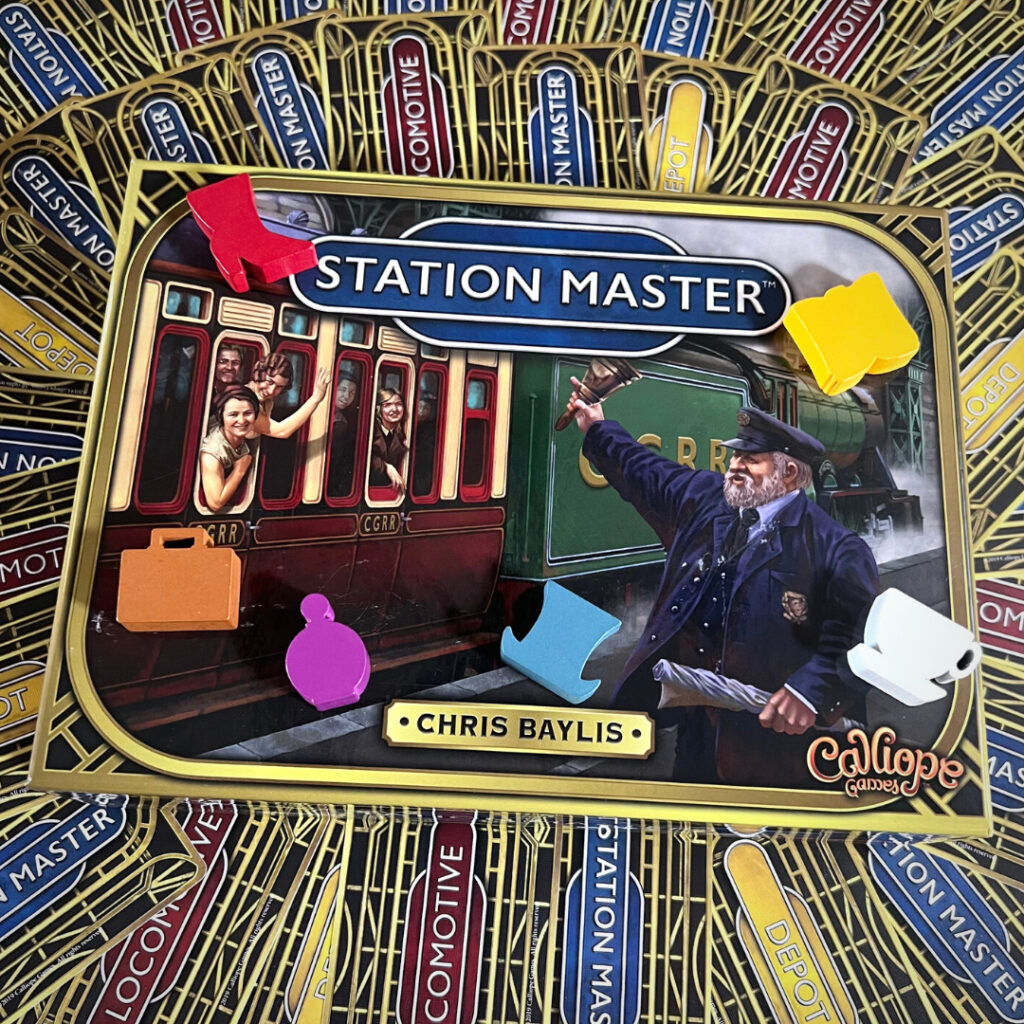 I’m bad at math!! Can I play this game?
No worries! The rulebook has a scoring chart in the back to aid with multiplication, and you can also download the Station Master app that lets you enter all the information and takes care of the scoring for you!

What if we go through the entire Station Master deck but we haven’t finished the Locomotives yet? Do we reshuffle it?
It is rare, but it can happen that the Station Master deck empties before the locomotive deck. If it does, don’t reshuffle! Just play with whatever is left in your hands. If you can’t make a legal move, you can pass your turn.