Everything You Need to Know About Ancestree!

If you live in the United States, like most of the Calliope team (everyone wave to our Art Director Andy who’s in Scotland!), then this week you’re probably getting ready to see some family and eat some turkey. So we figured, what better game to spotlight this week than the game about having the best family tree of them all: Ancestree! 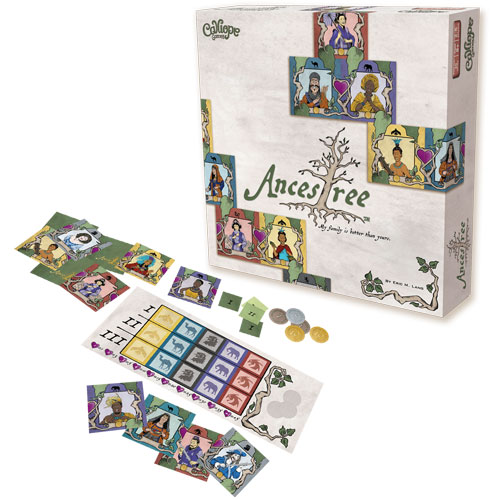 My favorite story about Ancestree isn’t even my story. It’s one that designer Eric Lang shared on his Twitter when the game released, and how having a brave playtester come forward changed the game for the better: “I designed Ancestree to be a gateway game based on a normally complex theme: genealogy and family lineages. Aesthetically and thematically, I wanted to go with a “historical” vibe.” And that’s how it was designed, giving a distinct “old-timey” feel to the tiles and the designs.

But then Eric found himself getting called out for only having marriages (which were then represented in the game through wedding bands) as only between a man and a woman. The conversation shook him; he’s a proud supporter of marriage equality, and he realized that he couldn’t hide behind “historical accuracy” when the people who play games want to see themselves represented.

“I made a change to the game to make marriages of all types open. Removing the rings and making it about “love” – two hearts that combine. Same sex, polygamous, doesn’t matter. Love is love. Redid some of the core scoring math and decided to test it. See what happens. A single play blew me away. The game play IMPROVED BY A HUGE MARGIN. HUGE. MARGIN. The fun of Ancestree is the silly story you can make about your crazy family and how visually different all the trees look at the end of the game. Visual variety increased multifold. Huge win.”

So now knowing that the gameplay is fun, silly, zany, and much improved, let’s take a look at how to play Ancestree. 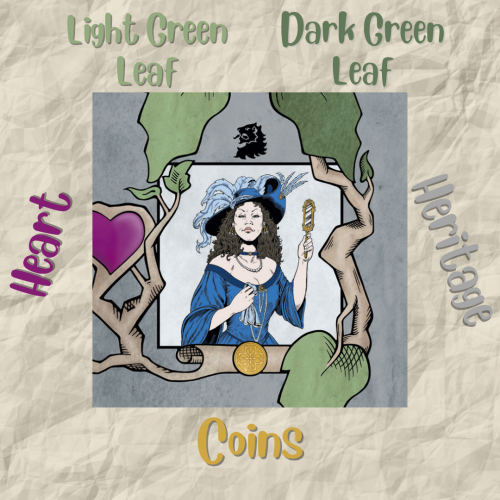 Setup
Shuffle all of the Ancestor tiles, and draw 6. Each Ancestor has 4 distinct features that will help score you points:

Heritage: This is the color of the tile and the symbol at the top. You win points for having the longest connecting heritage through generations.
Leaves: Leaves connect vertically, representing generation. There are light green and dark green leaves; you must connect light to light and dark to dark.
Hearts: Hearts connect horizontally, representing loving relationships such as marriage. Hearts only score on the last round of the game.
Coins: Coins represent those rich aunts and uncles! Each round you have them in your tree, you’ll get bonus coins during scoring. 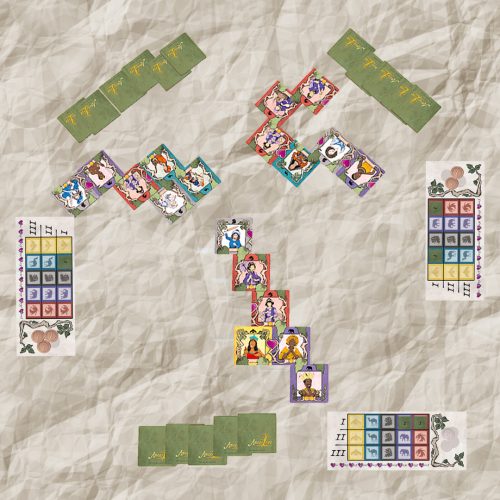 Gameplay
All acting at the same time, players will choose one tile to play onto their family tree, and then pass the rest of their tiles to another player (clockwise in rounds 1 and 3, counter for round 2). Players then simultaneously reveal their tile, and place it into their tree. Aside from the first tile, every tile must make a valid connection, either through leaves or hearts, but you can go up, down, sideways, whatever. As long as you have one valid link between tiles, it’s alright if other connections points don’t link properly.

You’ll play and pass Ancestor tiles five times per round. When you’re down to 2 tiles, you’ll play a tile, and the last one is lost to history! Once you’re out of tiles, you move to the scoring phase. You’ll play three rounds with three scoring phases, and then the game is over! 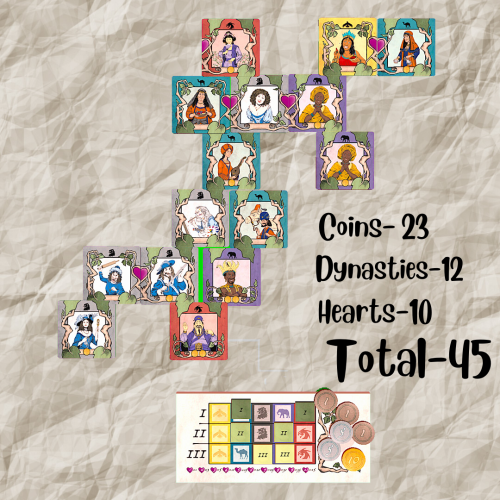 Scoring
Coins: Get one coin for every Ancestor in your tree with a Coin token on them. (Tip: Ancestor tiles from previous rounds are cumulative)

Dynasties: Compare your tree with those of the players to the left and right of you. For every Heritage (tile color and symbol) where you have a longer generational connection, you’ll score a Dynasty token for that round value. So you can earn up to 2 tokens for each Heritage. Dynasty tokens won in the first round are worth 1 point, second round are worth 2, and third round are worth 3.

Hearts: Hearts are only scored on the last round. Count up the number of connections you’ve made, and earn the number of points shown at the bottom of your score card.

After three rounds, the player with the most points wins the game and earns bragging rights for the greatest family tree in history! 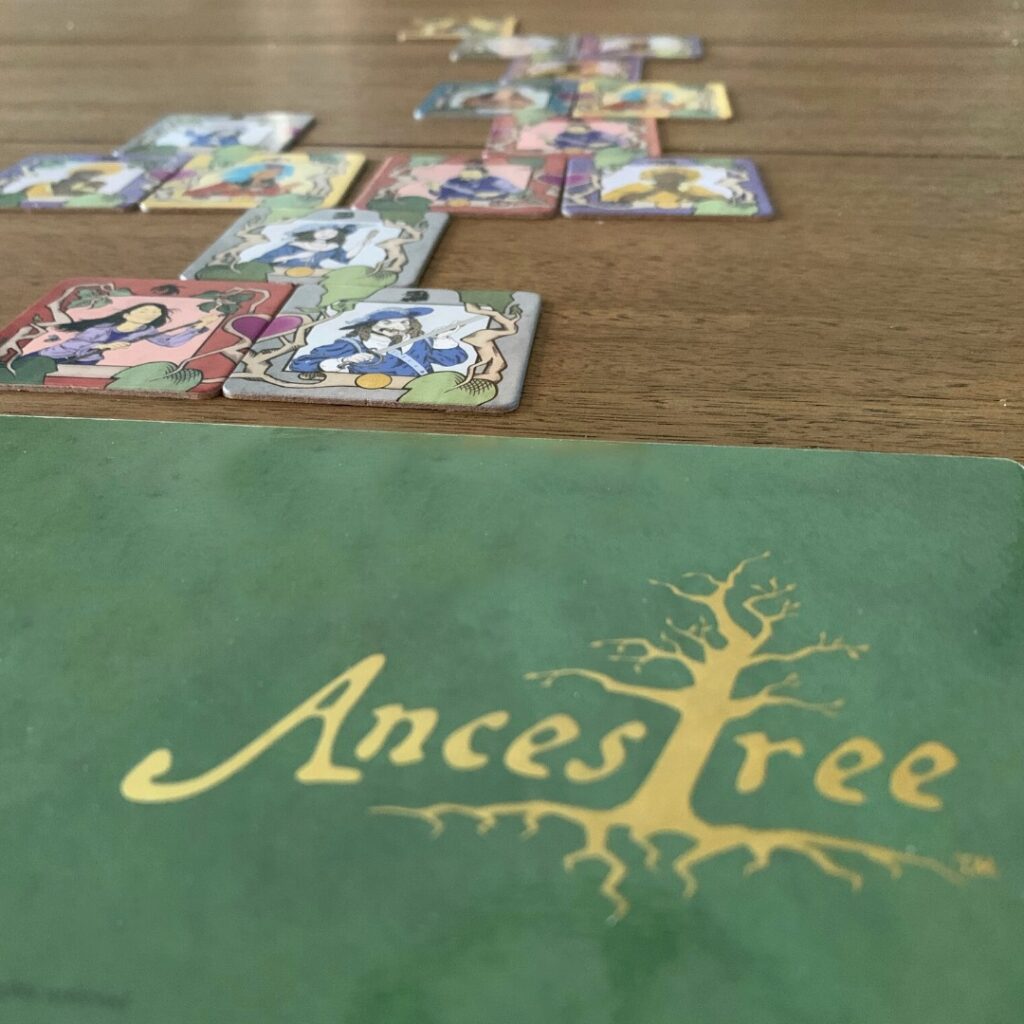 Is this a good game for gameschooling?
Absolutely! Not only does it encourage critical thinking skills, but the game is language-independent and the perfect introduction to a genealogy lesson. We don’t normally recommend altering your games, but you could also cover the tiles with faces of your family, and have some super fun shenanigans when Great Great Grandma Margarie winds up at the bottom of the family tree! (Just be sure to leave the border visible or the game won’t be playable anymore)

Does this game play well at 2 players?
It does! The fact that you get 2 dynasty tokens instead of 1 every time your heritage is longer than the other player shakes up the scoring strategies in a fun way.