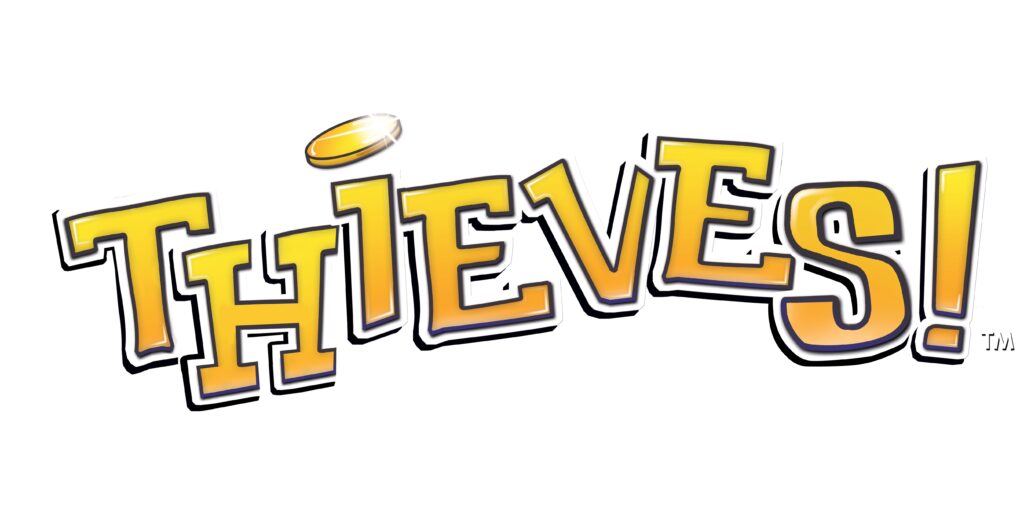 Everything You Need to Know About Thieves!

Thieves! is a hidden gem here at Calliope Games (and I’m not just saying that because there are little gems included in the game). It was first published in 2015, and is the epitome of fast-learning, fast-playing fun. This is a gateway game meant to introduce non-gamers to bluffing games, and it serves as a great filler game for a long game night! Oh, and did we mention it’s the perfect size for a stocking stuffer? 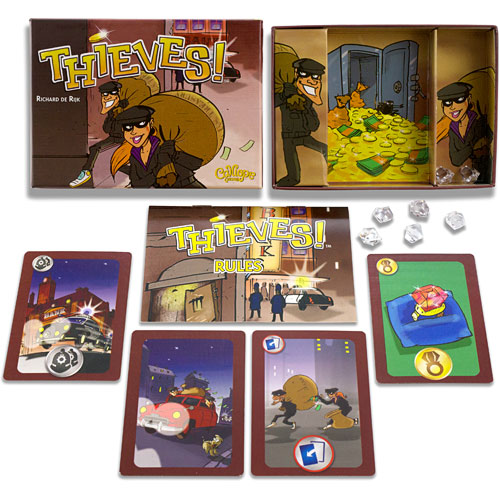 Thieves! is all about player interaction and deception. Players play one card on their turn – they can either play a loot card to increase the value of a player’s stash (including another player’s!), or switch up the game with a thief or police card. Thief cards alter a player’s loot, while four or more police icons trigger a raid! Throughout the game, getaway cars are drawn and placed on the table – when the seventh getaway car is drawn, the game ends, and the player with the most loot wins! 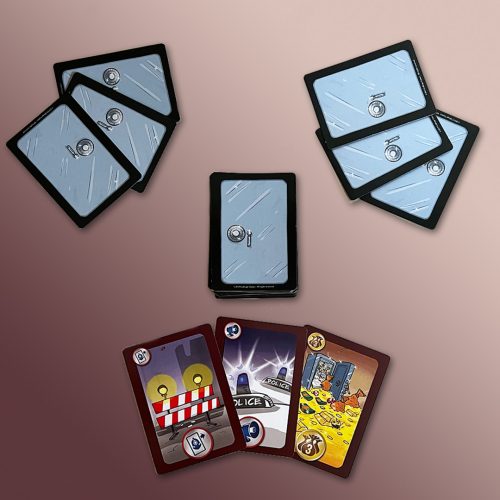 Setup and Gameplay
Shuffle the deck and each player draws 3 cards. If you draw a Getaway card, shuffle it back into the deck and draw again.

The game consists of two simple phases:
Phase 1: Draw up to 4 cards. If you draw a Getaway card, place it in the middle of the table and draw again.
Phase 2: Play a card

The fun (and the betrayals) come in what cards you play. 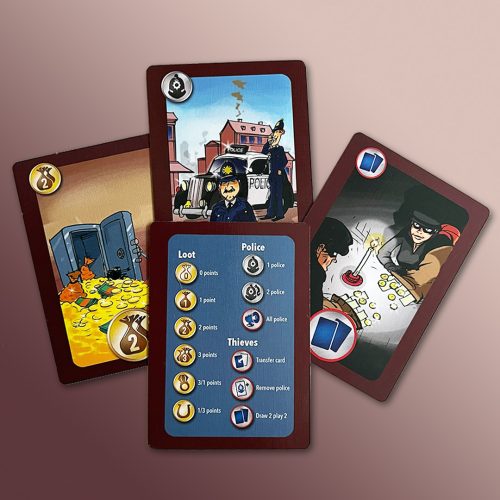 The Cards
Loot Cards: These are the cards that win you points! They can have a number value or a symbol that represents a stolen item that’s easy or hard to pawn later. You can play these cards face down in front of you, or face up in front of another player! This might make them more likely to be the one busted by the police in a raid.

Police Cards: Police cards get played in the center of the table, and when you reach a value of 4, a police raid is triggered. During a raid, all players flip over their facedown loot cards, and the player with the most loot gets busted and loses everything! If you play a Siren card, players immediately play all Police cards in their hands, and if the helmets total 4 or more, you’ve got a raid!

Thief Cards: These cards allow you to affect the cards on the table, such as moving a loot card from one player to another, removing helmet cards, or immediately drawing and playing cards. 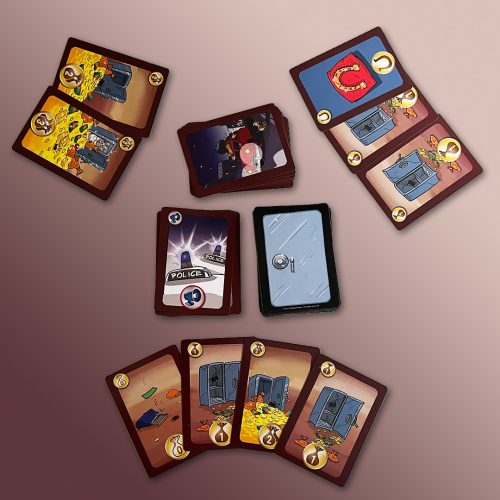 Scoring
Any time a player draws a Getaway card, they must immediately play it on the table and draw a replacement. Once the 7th Getaway card is played, the game ends, players reveal their loot cards, and scoring begins.

Loot cards with numbers are worth that amount of points. The Ring card is worth 1 point (it’s hard to fence a stolen ring), and the Horseshoe card is worth 3 points (you’ve melted down the gold to sell). The player with the most points wins! 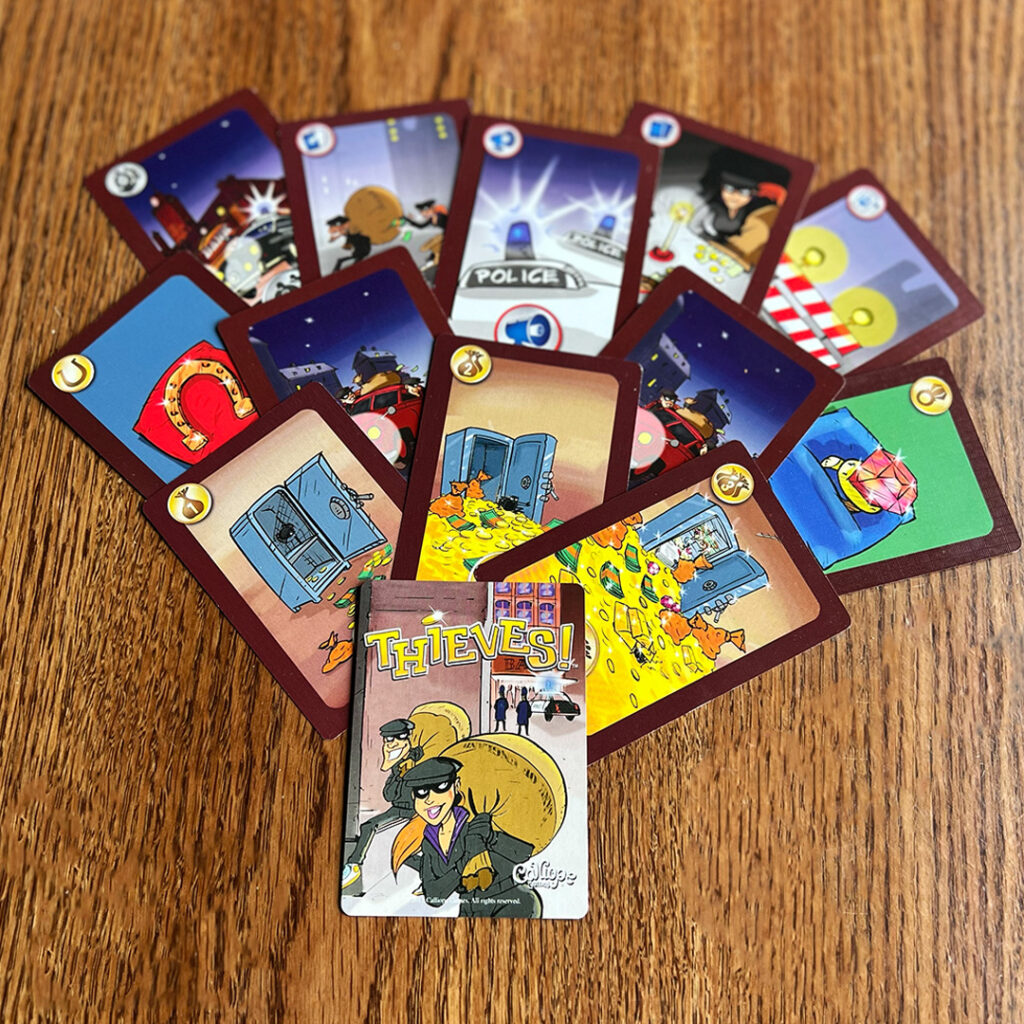 When there’s a police raid, what do I do with all of the stolen loot?
Great question! You’ll shuffle all of the busted Loot, plus the Police cards and any Thieves cards in the middle of the table, and shuffle them back into the deck. This constantly moves the location of the Getaway cards, and helps put the Ring and Horseshoe cards back into play.

Is this a good game for gameschooling?
Yes! The game is language independent aside from numbers up to 3, and it encourages critical thinking skills (deciding what cards to play face up, face down, or in front of other players)

Is it really 3-6 players? I thought Calliope Games had a minimum of 2 players.
You’re right, the majority of Calliope games play 2-6 players. This is one of the few (the others being 12 Days and Hive Mind) that require 3 to play (bluffing games are a bit harder at 2 players). But if you keep an eye out on this blog, we are actively working on a 2-player variant that will be just as fun as 3-6 players.