When we published The Mansky Caper, we knew we wanted to do something unique: make the rulebook a comic book! The comic takes you through what is essentially the first few rounds of a game as the characters navigate Big Al Mansky’s mansion, opening safes, setting off some traps, and hiding from Big Al himself. But what about before the caper? What brought these particular characters together to decide on such a glorious and high-risk heist? Well, thanks to the game’s designer Ken Franklin, now we know! He’s written a prequel story to the game, and given us permission to publish it right here! Without further ado, please enjoy Time for a Caper. 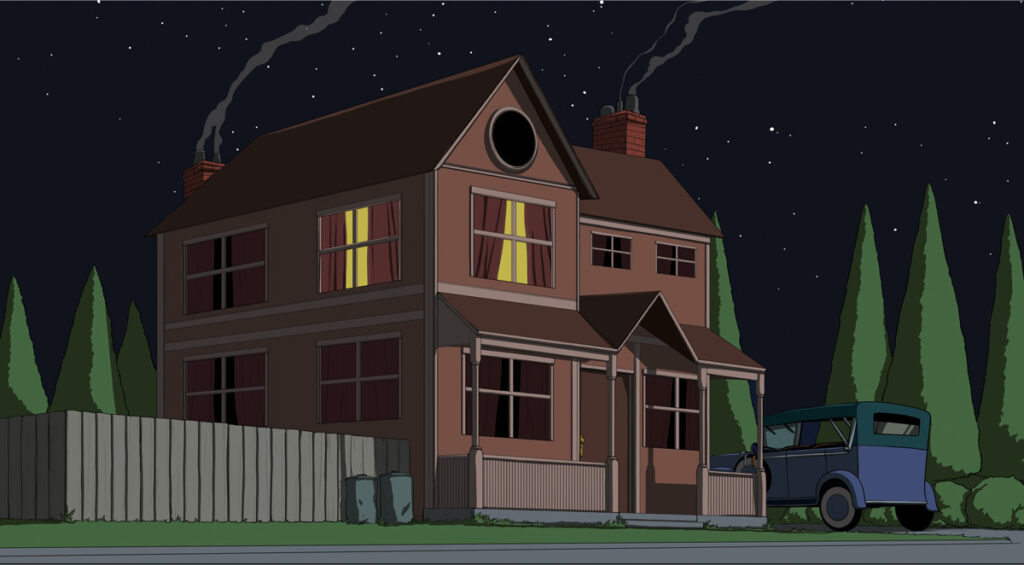 Frankie the Fixer and Lucky Lucy were just finishing their dinner at Georgie’s Italian Restaurant one balmy August evening. As usual, the posh joint was busy, and the wait staff astoundingly efficient and attentive.

“I assume you’re picking up the tab, Sugar,” said Lucy, folding her napkin and placing it on the table. “I seem to have left my purse at home.”

Frankie flashed his typical wry smile. “My dear Lucy, In the years I’ve known you, I don’t believe I’ve ever seen you open your purse. You do quite well without it.” He signaled for the waiter.

The waiter materialized at Frankie’s elbow, as if by magic. “I assume you’re looking for the check, sir. I’m pleased to report that the owner offers his compliments; there will be no charge. He is waiting in his lounge for the two of you, if you please.”

“Even luckier – for both of us!” Lucy gushed as she stood. “Let’s not keep the man waiting, shall we?”

A new voice came from behind Lucy. “Agreed!” She turned to see a striking contrast: a man in greasy work overalls, and a woman in a spotless – and perfectly tailored – tuxedo, complete with top hat.

“Deborah! What a delight! You look fantastic!” Lucy gushed. “And Nicky – the least you could do is clean up before you come to a restaurant.”

“Sorry, dear lady. No time. It took longer than I expected to repair the vanishing cabinet that ‘Abraca-Deborah’ here uses in her stage act.” Nine-Lives Nicky turned to her. “I don’t think you’ll have any more of that embarrassing hinge-squeaking next time you make someone disappear.”

“Hush, Nicky,” frowned Deborah. “You never know who’s listening. My secrets are my reputation, after all.” She turned to the others. “And speaking of secrets – any idea why Georgie has summoned us?”

“I can answer that inquiry, Ma’am,” boomed a voice from behind Frankie. A towering man in an Army uniform spoke from the back door of the dining room. From his impressive muscles to his sharp mustache, he looked as imposing as his command voice sounded. “Our host has asked us to report in at precisely twenty-fifteen hours. If you’ll follow me, we just exactly meet that objective.” He did an impressive about-face and gestured toward the door. Lucy led, followed by the others.

“Thank you, Sergeant Spike,” said Frankie, smiling as he passed. “Disciplined as ever!”

One hundred fifteen seconds later, the five entered a well-lit office with a desk, and an ornate conference table surrounded by eight chairs. To the right, a jittery young man was expertly manipulating a very intricate coffee maker, seemingly filling three cups at the same time.

“None for me, thanks, Joey,” Lucy said as Spike held out her chair for her. “Otherwise, I’ll be awake all night. A girl needs her beauty sleep.”

“Oh, hi, everyone!” Java Joey spun around, his words coming out as fast as the steam from the coffee maker. “Don’t worry; these are all for me. I fell behind a couple of cups on the way over here. Georgie! This Sumatran dark roast is the cat’s meow! Where’d you get it?”

“I know a guy who knows a guy,” responded a gruff, greying man from behind the desk. “Joey, how many times I gotta tell ya? Ya ask too many questions!” He got up and walked over to the table. “I’m glad all of you could come – wait.” He sighed. “Where’s Dolly?”

Just then, a rope fell past the open window. A woman in a bomber jacket slid down it, expertly dove through the window, executed a barrel somersault, and landed on her feet. Not a red hair was out of place. “I’m right here, Georgie. And how many times I gotta tell YOU? Doors are boring.”

Everyone provided polite applause as she bowed, even though they had all seen her use such moves before. Nicky chuckled. “Dolly Daring! You’re going to singlehandedly ruin the stunt double racket in Hollywood, sweetie!”

“Nah,” scoffed Dolly as she sat down. The less they pay the doubles, the more they can pay me.”

Georgie sighed as joined the others at the table. “OK. At least we’re all here. Joey, are you going to sit down?”

“I’d rather not, Big G. I’ll listen from over here – I’ve got to start another pot. These three cups are almost gone!” That drew a round of chuckles from around the table. This too, was nothing new. Sergeant Spike closed the window before taking his seat at the table. He announced, “The perimeter is secure, sir. Please proceed.”

“Thank you, Sergeant.” Georgie cleared his throat. It didn’t help; the gravel in his voice had been there for as long as the group had known him. “I asked you here to advise you of an excellent opportunity. But first, a question: who’s the person who has caused you the most grief in your life?”

The instant response from everyone was almost harmonious in its venom: “Big Al Mansky!”

“Exactly. That so-called businessman has his fingers in so many pies, he’s made the last ten years of my life miserable – and the same goes for each of you.” He looked around at the nods and the frowns. “Well, what if I told you that this weekend, we could square those debts in one night?”

Joey whirled around. “I’m in! That guy cornered the market on Brazilian French Roast; it’s getting so a guy can’t score a pound of those beans at any price!”

Abraca-Deborah leaned in. “His grip on theater buildings has cut my gate in half – which is how I’d like to saw him.” The others all murmured agreement as Georgie leaned back – and smiled.

“Well, my friends – the illustrious Mr. Mansky had decided to spend the next weekend at a spa upstate. And as you know, Big Al doesn’t trust cops or banks, so all his riches will be in that house. His mansion will be completely unguarded. And I happen to have –“ he held up his hand – “copies of two keys to the house.”

Nicky let out a low whistle. “I heard he uses those new mercury-balanced 7-tumbler safes. I can’t wait to crack those beauties and examine them – from the inside.”

Dolly let out a squeal as she pumped her fists over her head. “What are we waiting for? This is going to be the thrill of a lifetime!”

Frankie held up his pen, and opened his mouth to speak; but a knock on the door interrupted him. Everyone, including Georgie, jumped a bit; the restaurant owner did not approve of intrusions during his meetings. Spike was on his feet immediately – but Joey beat him to the door by two steps. “Who’s there?” Joey sang out, in his usual caffeinated vibrato.

“The name is Smythe,” came a voice in perfect Oxford English, as the door opened. “Sidney Smythe. I represent my employer. I bear you no ill will, and present no danger.”

Georgie sprang to his feet, fists balled. “Big Al’s butler?! What are you doing here?”

“I prefer the term ‘personal valet’,” Sidney continued. “I must admit that I am unaccustomed to the role of messenger. Nevertheless, my loyalty to Mr. Mansky compels me to offer you an article of information, and an item of communication.”

“Please, continue,” intoned Frankie, coolly. “We can then consider the terms of a lawsuit for the trespass that you are committing.”

“As you wish, sir,” Sidney replied, unperturbed. “The information: anyone attempting to – intrude upon my employer’s residence will likely be subject to the efforts of his new hobby.”

“Quite, sir. Machinery involving high explosives and detonation of same. And it has been installed extensively throughout the premises. Specifically, in the safes that hold his wealth.”

Joey dropped his teaspoon. The others in the room blinked in surprise.

Sidney continued, “That brings me to the item of communication. My employer has instructed me to say three words, in the local vernacular:

Sidney turned and left. Joey closed the door behind him.

Everyone remained still and silent for a full five seconds. The only sound was the whistling steam from the coffee machine.

All eight people had the same two thoughts: first, each wanted even more to rob Big Al blind after such a brazen challenge. The second thought: if someone else had an unfortunate encounter with these new “machines” – that just left a bigger share for them.

Lucy spoke up first. “Shall we say… Saturday night at nine?”

The others nodded as one.

Is that how you always saw it happening? Have you ever written a story for a board game? … was it for a Calliope game? If so, please share it with us! You can post it on social media, or email it straight to the Social Jockey herself: risa@calliopegames.com. And as always, if you enjoy playing The Mansky Caper or any Calliope title, please be sure to let us know. It makes us happier than these 8 planning to rob Al Mansky blind!