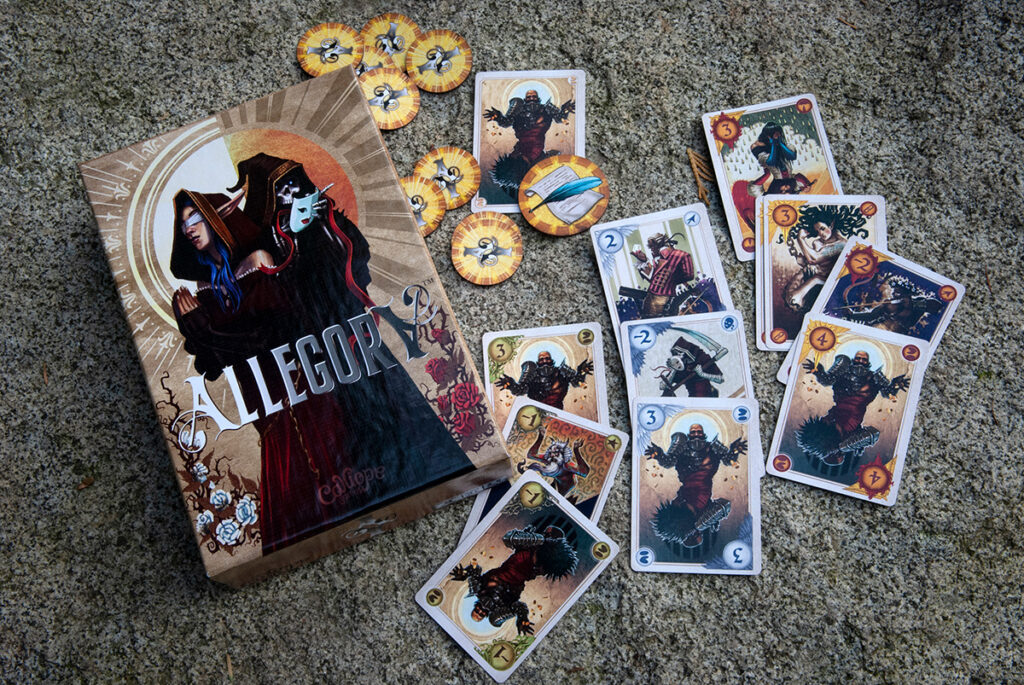 When developing a game, there are multiple paths a designer might take. Sometimes they start with the theme of the game, like in Enchanted Plumes, where designer Brendan Hansen knew he wanted to make a game about peacocks, and everything evolved from there. They might start with an incredible concept for gameplay, and need to find the right theme to fit it. Tsuro, for instance, began as a game called Squiggle, and The Mansky Caper started out as a cave diving, treasure-hunting game. Sometimes the game and theme are developed simultaneously; Mass Transit was always going to be a card game about  navigating through a city, it just needed to fine tune a few things (did you know it originally contained blimps?).

When designer Zach Weisman (Menu Masters, Sea of Legends) brought the concept of Allegory to Calliope Games, it was a tight, concise, easy-to-learn game that fit perfectly into Calliope’s lineup. That being said, Allegory took quite possibly the most creative twists and turns a Calliope game has ever experienced. For a game so simple and clear in gameplay, it needed a theme that matched that ease and elegance. Today we’ll take the journey of how Auction Game became Allegory.

Let's Start with the Gameplay

Allegory, like all Calliope games, can be boiled down to a few basic rules. Like in poker, players bid for the card they want until all but one player has folded. Unlike poker, the winner chooses the card they want, and then distributes the winning bid across the remaining cards. Now in later rounds, when a player folds, they can choose to take the card from the middle that has the most chips on it, meaning it would encourage a winner to play chips on a negative-valued card to try to slow down their opponents.

Players strive to balance three card tableaus of different colors (which wound up being white, orange, and green), but the twist is that only the lowest scoring tableau will count towards the final score. You get additional points for collecting sets of 3 cards with the same symbol, and a bonus point for each tableau that contains your secret objective symbol.

Of course ZAG would have worked as is, but Calliope Games does have a reputation for putting a great story into each of our games (sure you can chuck dice and move around hexes, but when summiting Yeti Mountain now you have Dicey Peaks!).

Zach came in with the idea of collecting Roman or Greek artifacts, or perhaps filling out a library with different kinds of books. When Calliope President Ray Wehrs hopped on board, this shifted to curating and filling out an art museum; a subtle nod to his previous career as an art gallery owner. But something still didn’t feel quite right. As Calliope’s art director Andy Hepworth put it: “Sometimes a project is easy and straightforward, and lets you know early on what it will be about. Others, like Allegory, are determined to make you work for an outcome.”

Several wide ideas for a theme that got thrown around, such as developing worlds in a space empire, digging plots in a garden, building steampunk robots, and creating wildlife exhibits in a zoo.

As the team brainstormed, even hiring artists to begin conceptualizing several of these ideas, they realized that the more the focus was on the theme, the less focus there was on the elegance and simplicity of the game mechanics. This was a game inspired by poker, so why not let the cards speak for themselves? Andy said once the storyteller idea arrived, they were off to the races. “I think it opened a much broader set of themes for us than we were previously looking at. A richer vein of imagery that is not at odds with the gameplay or struggling for attention next to it. There is – for me at least – a natural synthesis between the artistic representation, the theme of the game and the gameplay itself.”

Ray’s idea was inspired by an elegant poker deck; something that people would bring out for the artwork as well as the gameplay. He was further inspired by tarot decks, and how readers will collect different sets with different art just because of the art itself. We needed a theme that put the artwork front and center, one that told a story. Hey, wait…

The best part (in my humble opinion), is how broad each card became, even with the duality present on each side. One could look at a card and see the dichotomy of hardworking and lazy, while another saw the card as aggressive versus passive, while yet another interpreted it as moving forward or standing still. Players truly become storytellers as they play, and the cards shift and morph to fit the tale being told.

And last, to leave a legacy...

Ray’s idea worked! Dan from The Fandomentals said, “The whole game has a sort of dark baroque atmosphere that I’m absolutely in love with, and I’d love to see a proper Allegory-themed deck of playing cards from Cornish.” We would too, Dan. We would too.

So what lesson did we at Calliope Games learn through the development of Zach’s Auction Game to Allegory? Sometimes, less is more. Keep it simple, silly. Set it up, and then let the players draft their own meaning. …Kind of like telling a story. 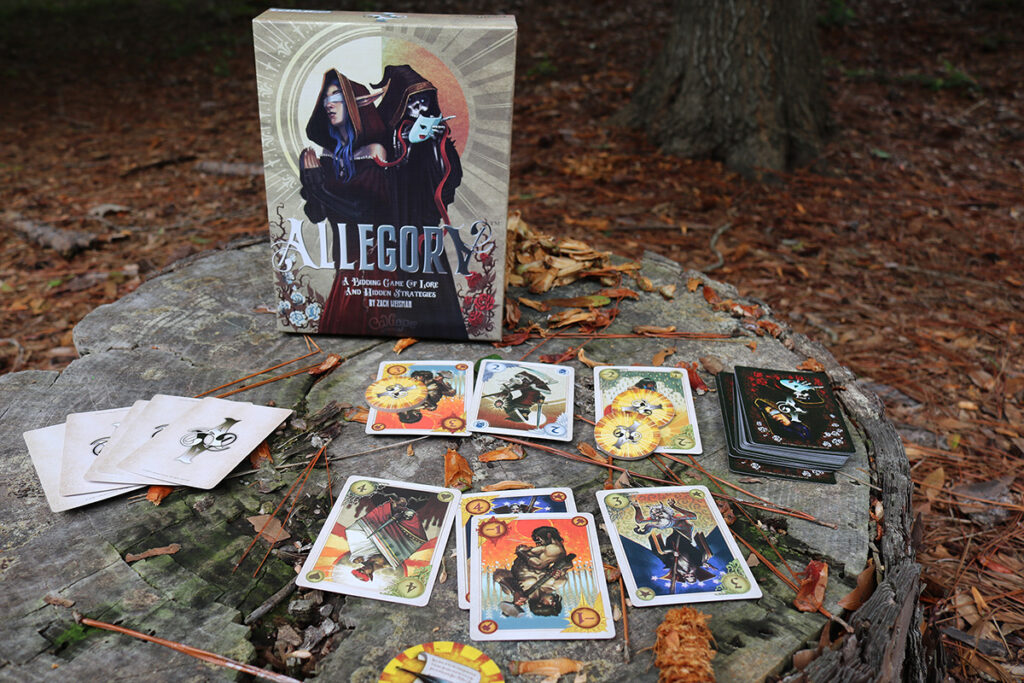 What stories have you woven in Allegory? What card art speaks to you the most? Let us know in the comments, or on social media using #CalliopeGames.