Everything You Need to Know About
Double Double Dominoes!

For the month of September we are thrilled to be diving into some Calliope Cozy Classics! These are some of our original games we ever published, most over a decade old, and proudly still in our catalogue! Grab a cup of tea and settle in with our first spotlight: Double Double Dominoes! 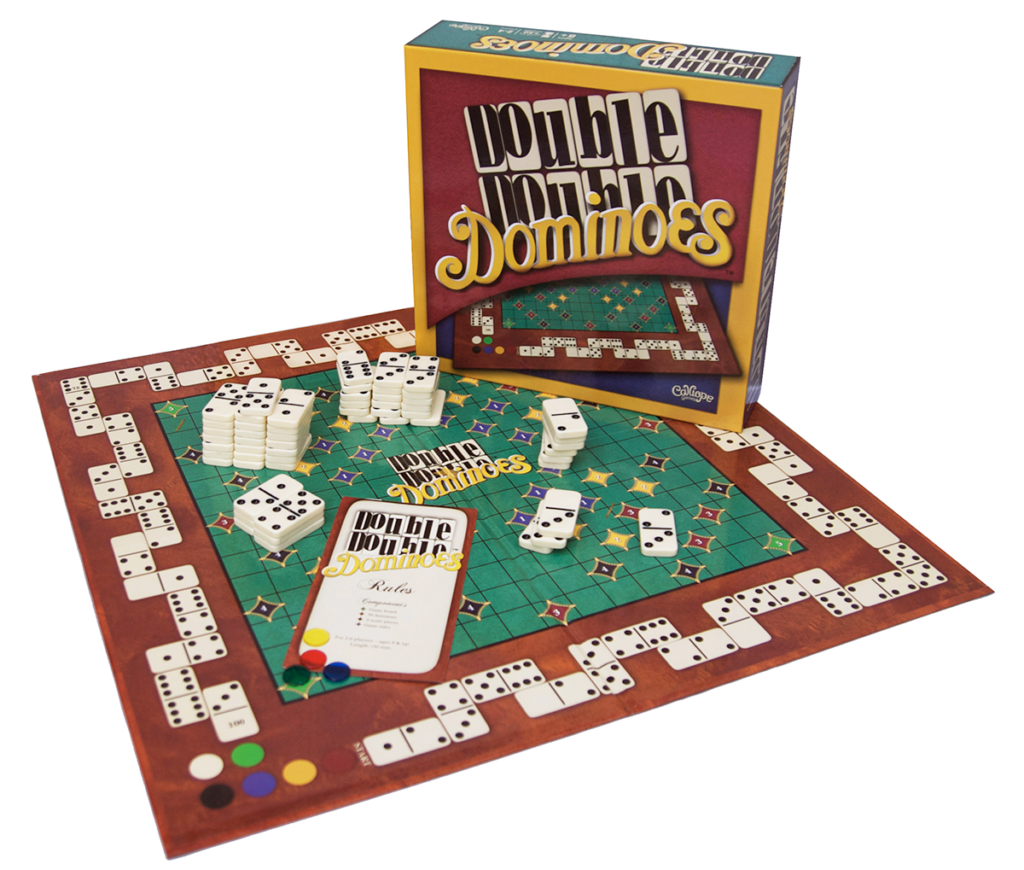 Published in 2011, and designed by Seth Johnson and Jordan Weisman, Double Double Dominoes has been described as “Dominoes Meets Scrabble” and it’s not hard to see why! One look at the board full of squares and point values, and you already have an idea of how you’ll be playing. Your goal is to reach the target score along the score track first, and you’ll do this by covering point values on the board, and playing dominoes that match the value of the score track spot you’re currently on (and by not playing dominoes that match your opponent’s score track spot!). 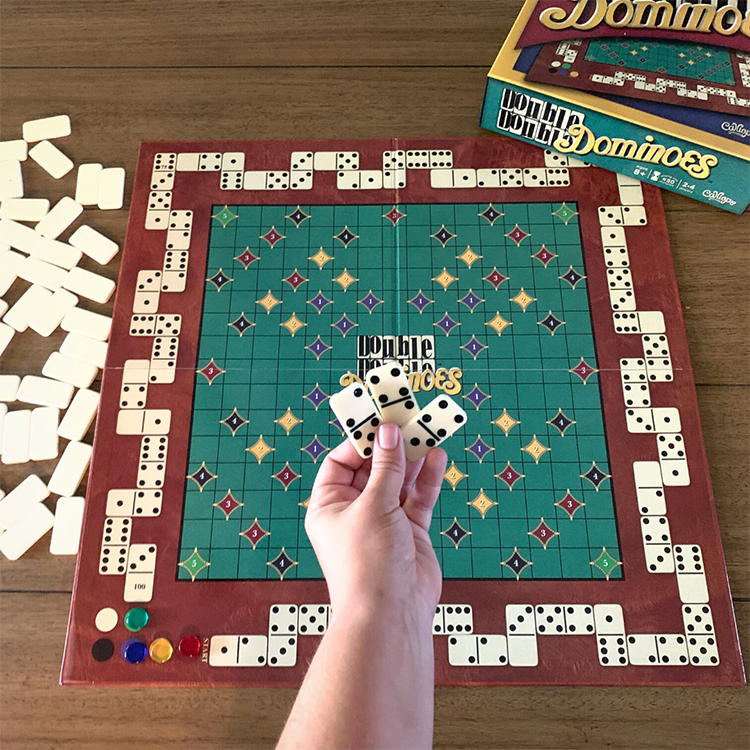 Setup
To setup, everyone choose a starting color marker and place it on the score track. Scramble the dominoes facedown in a pile next to the board (called the Boneyard) and take 3 dominoes for your hand. The person with the lowest-valued domino goes first. If there’s a tie, the oldest player goes first. The first player plays a domino on the star icon in the center of the table. 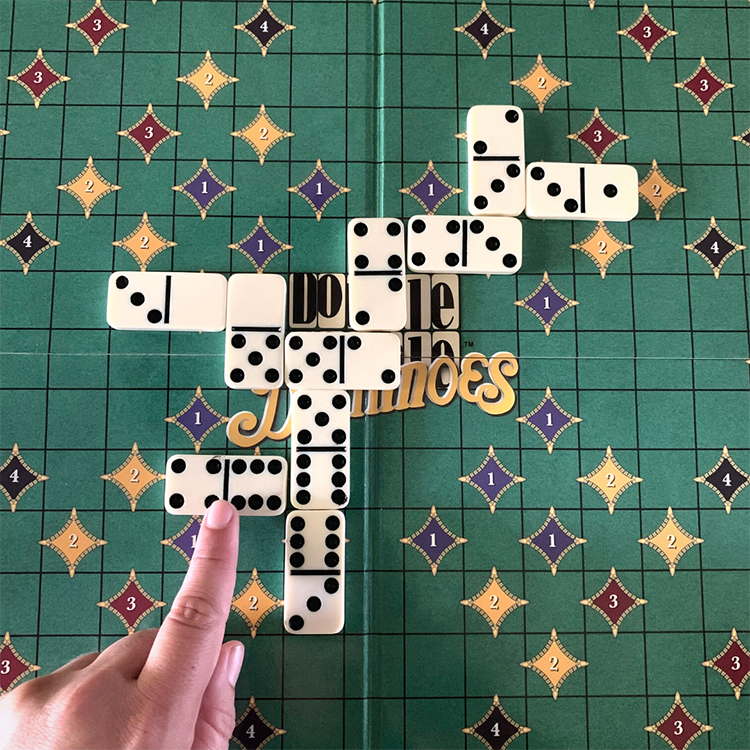 Gameplay
Draw a domino from the boneyard, and then play a domino from your hand onto the table, making sure that it touches and matches a domino already on the table. So a 4 has to touch a 4, a 2 has to touch a 2, etc. You can play the domino in any direction you want as long as the matching numbers are touching. If at any point you can’t legally play a domino, you’ll end your turn by discarding one domino into the Pit, or discard pile. 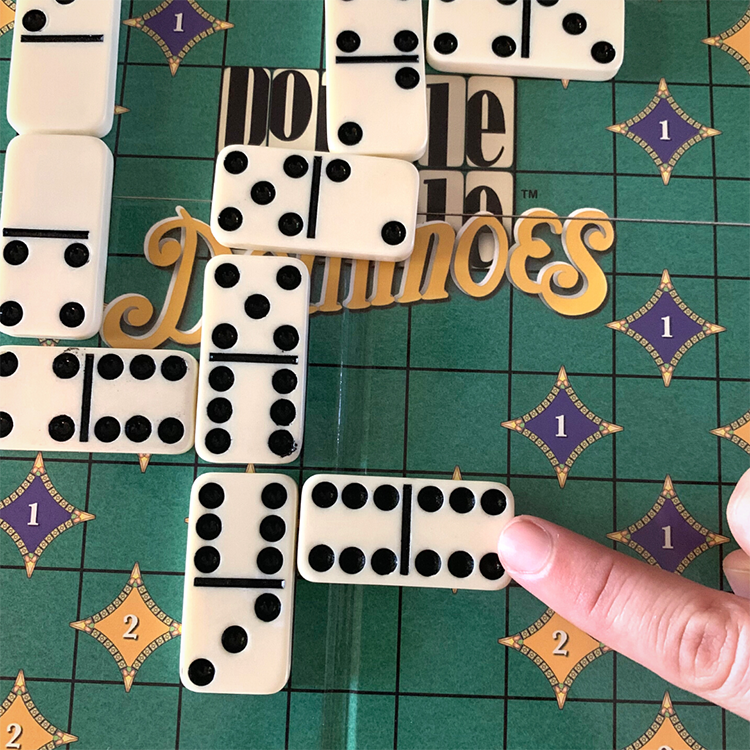 If you play a domino where both halves (the Head and Tail) are the same, this is the titular double domino! Any time you play one of these, you may play another domino from your hand (and yes, you can play multiple double dominoes in the same turn, but they have to touch). Draw back up to 3 dominoes when your turn is over. 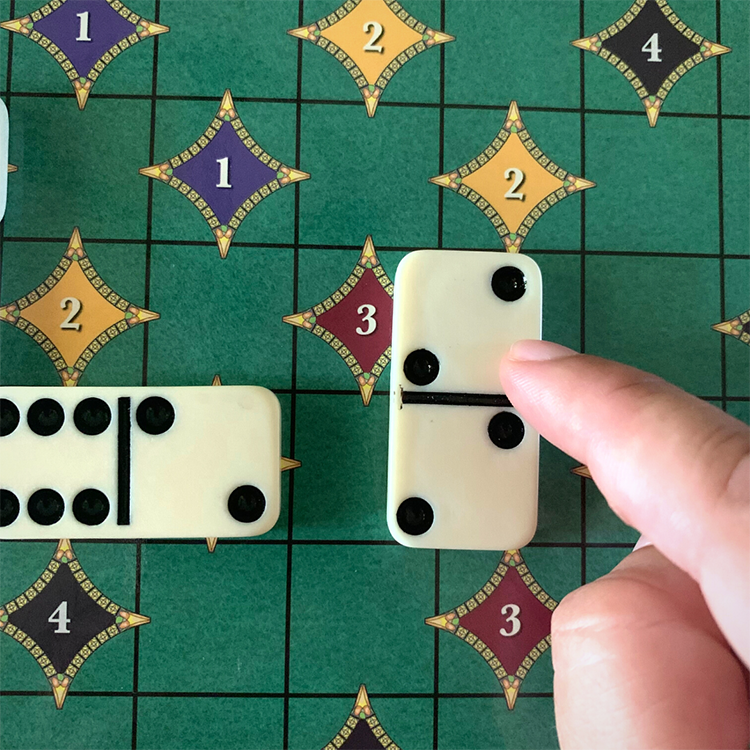 If the tile you played was a double domino, score double the amount of points! 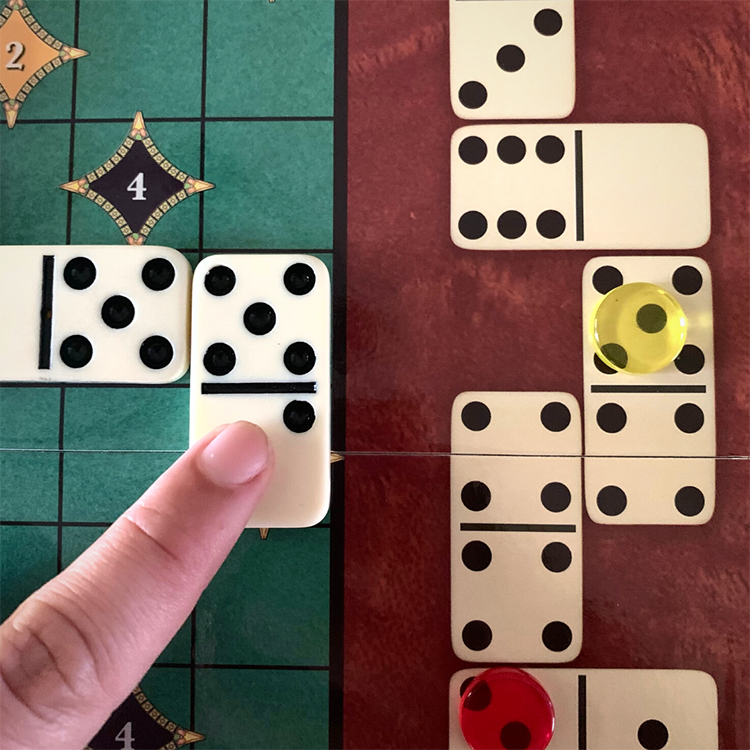 If anyone (you or another player) plays a domino with a value that matches the score track spot you’re currently on, you’ll score 3 bonus points and move forward 3 spaces. Bonus points are only scored once for each domino played, so no stacking with the double dominoes.

The number of players will determine the final score goal. First to reach it, wins! 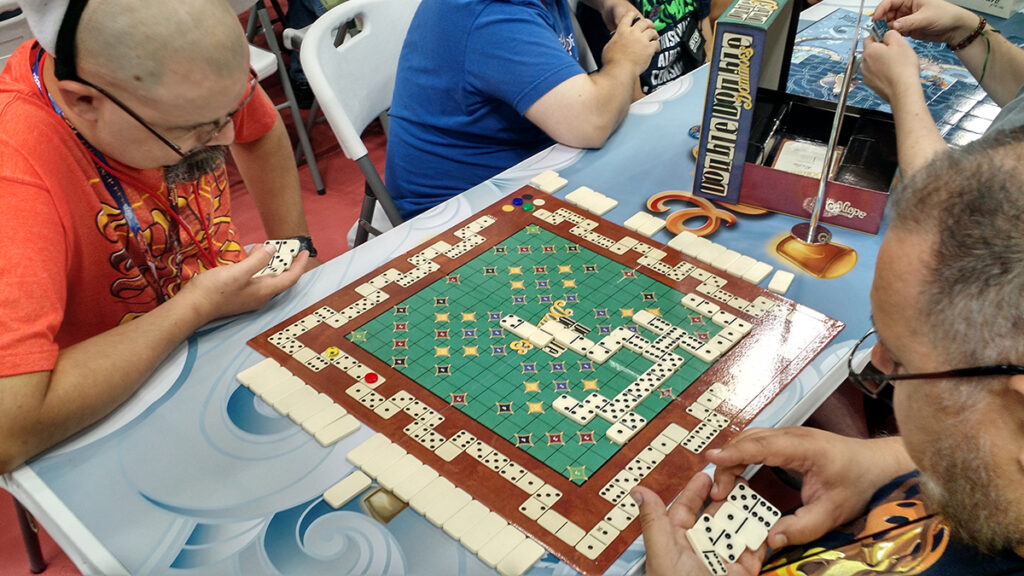 Do I have to play the domino with the lowest value on the star at the beginning of the game?
Nope! That domino just determines who goes first. You can start with any domino you’d like.

Is the blank domino a zero or a wild space?
It’s a zero. It can only be matched with another blank domino.

Is this a good game for kids?
Yes! This game requires zero reading, and is excellent for reinforcing number identification and values. The box says ages 8+, but we’ve definitely seen younger players enjoy the game just as much!

The rulebook says 2-6 players, but my box only has components for 4 players. What gives?
Truthfully? This game was published a decade ago, and we did things a little differently back then. The base game had enough for 2-4 players, and we had a short-lived expansion pack to play 5-6. But it turns out, people just used their own dominoes to add more players! So we kind of leaned into it, and now we offer a more affordable game (less components means less cost, which means a cheaper game) that everyone can enjoy it regardless of player count.