This month’s Guest Bloggers are Sushiball Games! Husband and wife Patricio and Alena (and their dog Sushi) started their blog in August 2020, and offer a unique perspective in their board game reviews: Language Accessibility. Today they are sharing what that means, and how gaming can create valuable opportunities for folks who speak different languages to enjoy time together around a table.

Language Barriers and Board Games

Board games have been a great way for families and friends to get together and enjoy a night of snacks, beverages and conversation. But what happens when you have family or friends that don’t all speak the same language? Does the conversation part go out the window? Perhaps you’re the only one who doesn’t speak the language everyone else knows, because you did not grow up speaking it. At Sushiball Games we have come across this scenario many times, as our families grew up speaking different languages. As our little family started to play more and more board games, we wanted to share these great games with our families. At first, we did not realize how heavily some games rely on language, while others don’t require any language at all. But a language barrier is not an impregnable wall that cannot be scaled. A language barrier is just a small hurdle that does not need to be feared. Language is vital to our lives and it is not a great feeling to be excluded because you don’t speak a certain language. We wanted to talk about how important language is in board games, as it is a regular part of our lives and something that we rely on for communication as a species. We also wanted to give you our individual takes on language barriers as we (Patricio and Alena) are on different sides of the language barrier, and to give you our recommendations for our favorite games to play with a language barrier. 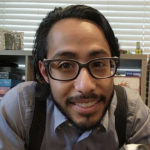 Every husband and wife team shares their families, and we all meld together into a larger family who will get together and share their lives with one another. Sometimes families come from different parts of the world through different walks of life. In the case of our family, one half came from Mexico and the other from the United States of America. My  family came from Mexico, so I grew up speaking Spanish and learned English in elementary school and growing up. My parents know very little English so whenever our families get together, usually some translation is required. While this is not particularly lengthy of a process, it does hinder some communication as words don’t always translate easily, especially when it comes to jokes and puns. Sometimes I get pulled into a conversation and it’s lengthy to translate an entire conversation quickly and efficiently so things are condensed since some details are not important. Sometimes it is important to relay all the details in which each little part has to be translated between people involved. As you can already tell, language is important and translation can detach from the full immersion. It feels sort of like people being at the pool. Some people are in the pool, some are sunbathing nearby, and you have your feet in the pool trying to stay in the middle.

When it comes to board games I find it easiest to stick to more abstract games. These are games that have an overall theme and goal, but don’t necessarily have narrative or a story line. The perfect examples that pretty much everyone is familiar with are Checkers and Chess. These are games that require little to no interaction with the other player. If both players know the rules, they can both simply play the game and not worry about having to explain each step. In fact, international chess tournaments ask that you speak very little and be quiet during play. They are classic games that require no communication, but they are not great examples of what can be played with a language barrier. 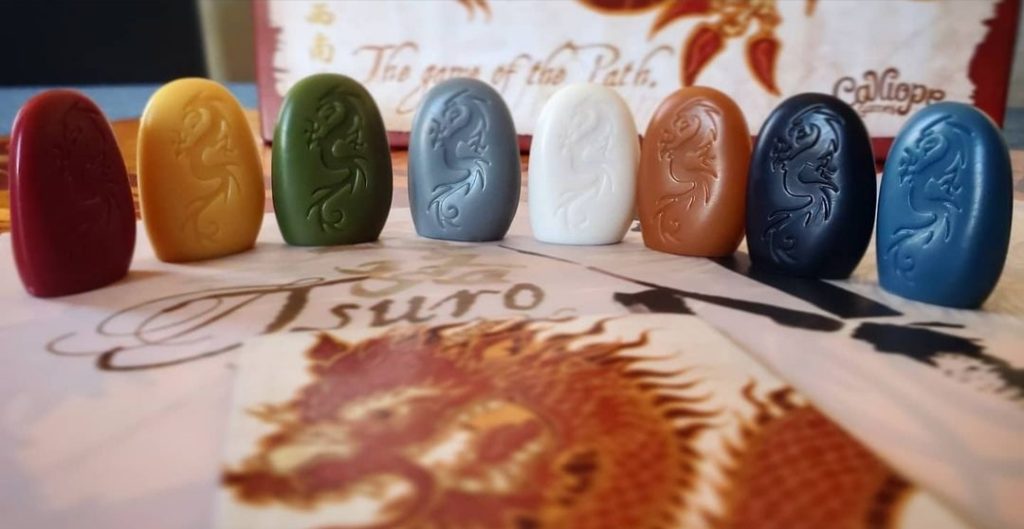 Tsuro by Calliope Games is a game wherein you try to stay inside the board by strategically placing tiles that create a winding path for you and opponents to follow. The last person inside is the winner. Tsuro is a great game that requires little to no communication, but is lax enough to let you show your frustration to an opponent and have a good chuckle when you get someone eliminated. It is very easy to explain and it all relies on being able to follow lines on tiles. No reading, no translating, all fun. 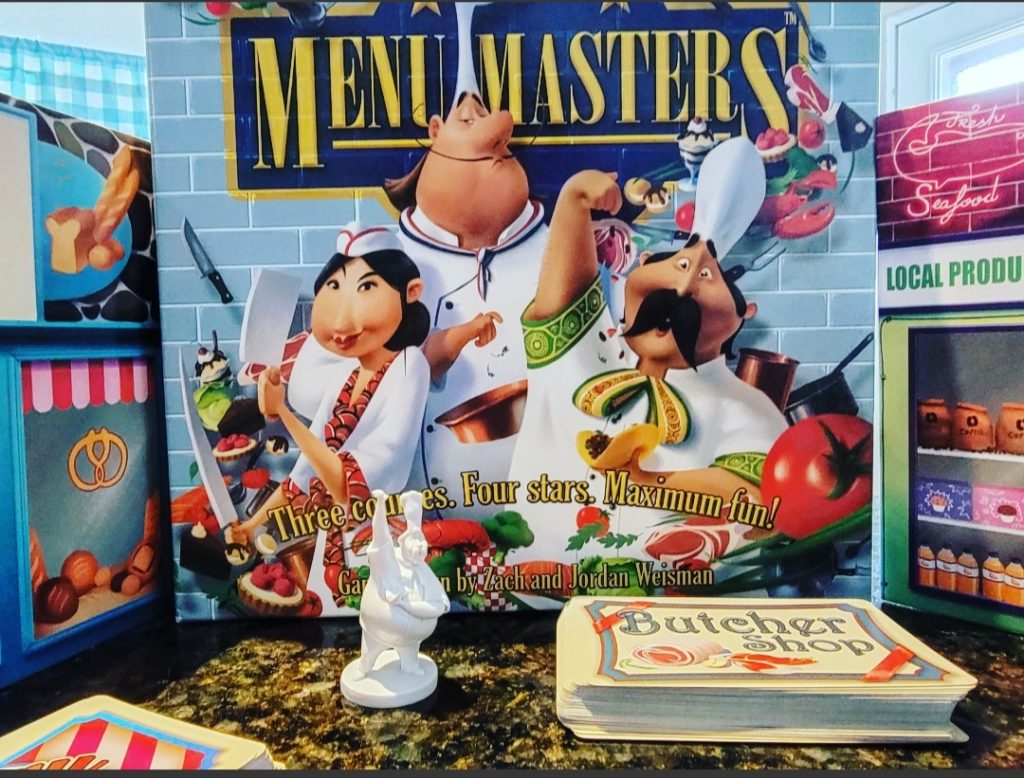 Menu Masters by Calliope Games is a large step up from Tsuro in terms of language barrier. In Menu Masters you are a chef trying to get ingredients, keep your costs down, make money and make delicious food. Already that sounds like it would be a lot to translate and explain. The rules are the only part of the game that requires translation. After the rules are explained it is a fun game that allows for player interaction without needing to speak the same language. You might even pick up a few words from other languages as people try to snatch up ingredients for their food! 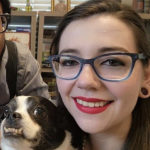 I only speak one language fluently, English, and when I met my husband I found out that most of his family speaks mostly Spanish. His parents would try to talk to me in English and I would try to in Spanish and we’d make our best efforts to utilize each other’s language in the pieces that we know. However, when we all started playing board games together, it was like a whole new level of communication opened up!

Playing games with my family that speak Spanish has allowed me to learn so much more organically. Sometimes it also allows us to not worry so much about language, but understand through visuals as gameplay progresses and individual strategies are formed. I’ve gotten to know my family more– my father-in-law’s poker face, my mother-in-law is always the yellow meeple, my sister-in-law who does not like to lie even in a game. As my husband’s family mostly speak Spanish, I think it is even more impressive how often my parent’s-in-law beat us at games because they had to essentially memorize the rules without a written reference.

Even when we play games with my parents who speak English, understanding how much explanation and language is needed in a game still comes in handy as we’ve learned the most concise ways to explain game rules. 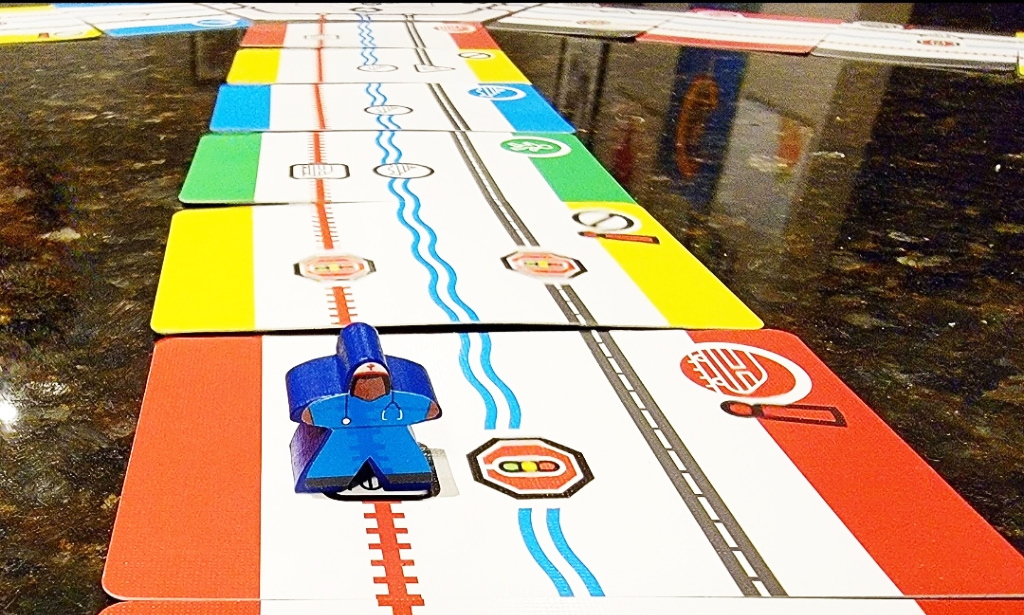 We always look for games that either my husband could translate or that include translations as well. Sometimes Board Game Geek has users that will upload translated rule books, but it is not always available for every game. Running into these barriers to entertainment are difficult and sometimes unavoidable, but when game companies make that extra effort to make language accessible it creates amazing opportunities for people to come together.

When we review games at Sushiball Games, the reason we include Language Barrier Playability as one of our review criteria is because it is very pertinent to our lives. When we started playing Calliope Games titles, we instantly loved that they strive to make games with a few basic rules and the rest is just play. We liked that we could focus on creative strategy rather that needing a lot translated. 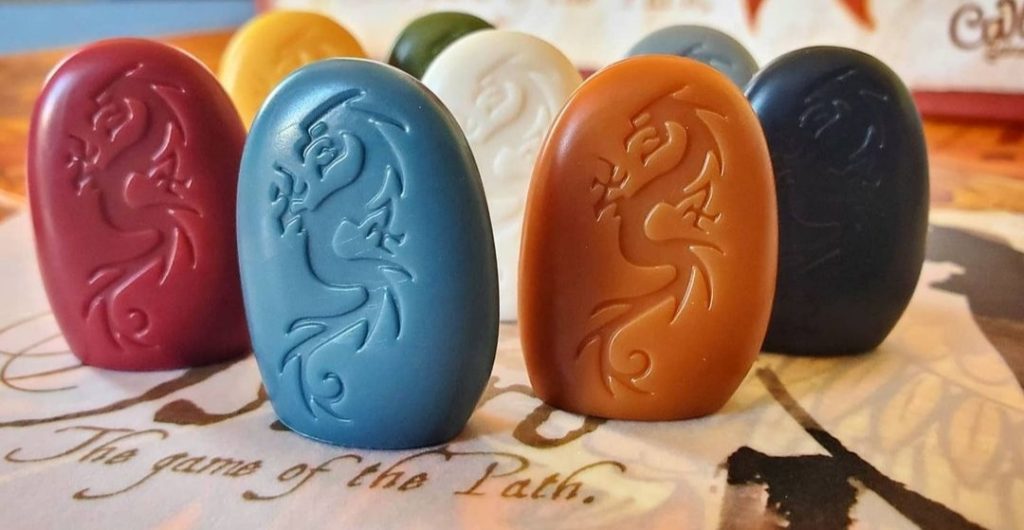 While I am working on language, I’ve loved learning Spanish and applying it to games, “Si, es mi turno… listos?…no puede…tengo tres cartas…los dados están aqui” learning how to move around a game board in another language is an amazing experience.

At the end of the day, we hope that families who speak multiple languages or have language barriers venture into modern board games and all of the options available. For board game publishers, our hope is that more will venture into being a partner to language accessibility because of the positive affect it can have on your customers’ experience. Calliope does this so well and it is something that means a lot to us and our family. 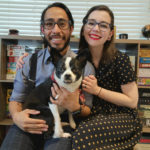 We are Patricio and Alena, and we started Sushiball Games, named after our dog Sushi, because we found ourselves spending so much time playing board games that it became something we had to share with others! Playing board games is one of our favorite ways to spend time together as a family. Sushi even loves to sit at the table and pretend to play games with us, so really all of our reviews are technically three player minimum. The board game community welcomed us and we hope to continue to welcome others into this amazing, creative hobby!